Here is an extract from 'The IEC 61499 Function Block Standard: Launch and Takeoff', by Thomas Strasser et al.

Mass customization of footwear is characterized by very dynamic and heterogeneous demand for products whose features are customized to user requests, and by generally high production volumes, thus justifying the adoption of highly automated production systems. The high number of product variants and possible customizations, together with the need to match evolving production requirements and market trends, can be accomplished only by relying on extremely agile and reconfigurable production solutions. A production system has been developed to meet the challenging requirements of this market. The resulting modular and reconfigurable system architecture, illustrated in the figure, comprises a number of production islands 24 connected by a flexible transport system. This system was named the European Best Practice in mass customization in 2009. The production system architecture is composed of the following main production phases: (1) cutting of shoe components, (2) stitching of the shoe upper components, (3) last milling, (4) shoe assembly and roughing, (5) sole application, (6) shoe finishing, and (7) packaging. In order to match the evolving production requirements, the production system has been conceived with two major characteristics: 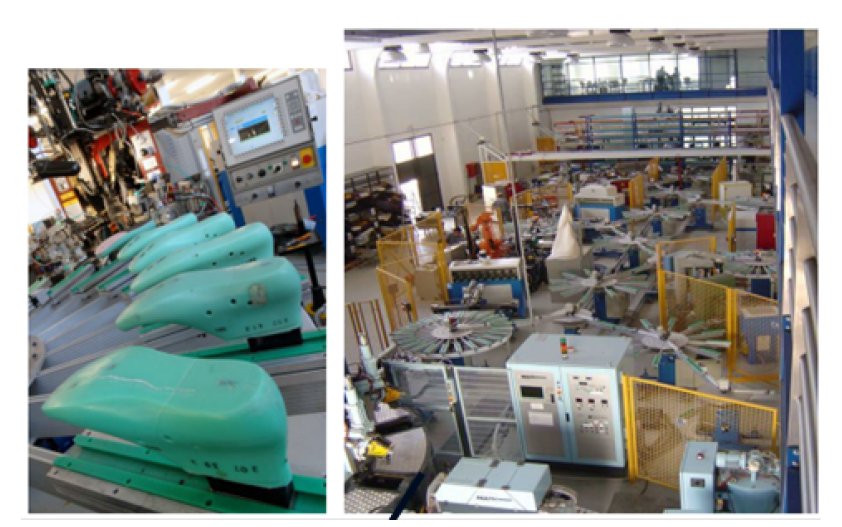 Compared to traditional control solutions characterized by monolithic, rigid and loosely­coupled architectures, the development of IEC 61499 based control software is conceived to enable efficient control modifications without a major overhaul of the entire software so to accomplish the integration and/or substitution of portion of the control software driven by system reconfigurations or adaptations.

The shop floor control system solution relying on IEC 61499 standard has been implemented in ISaGRAF 5.2 workbench. Specific Function Blocks of the implemented control system incorporate a set of control 25 algorithms devoted to ruling single controlled mechatronic components, as well as module optimization policies whose goal is to compare the actual and nominal behaviors of components and executing an adaptation if necessary. Full modularity and reconfigurability of single modules is thus supported, both from hardware and from software point of view. In fact, twofold automation reconfigurability has been incorporated in the control Function Blocks, facing both forecasted and unforeseen events:

Both the off­line and the on­line control reconfiguration policies require - beside the control module integration at shop­floor - an adaptation of the dispatching process. For each single product, it ensures the understanding of the mapping of tasks ­to­ be­ performed vs. resources, dynamic step by step building of consequent product routing, and resulting distribution of tasks across (new) available resources. The deployment of such a solution evidences how the IEC 61499 approach extends not only “horizontally” (i.e., at shop­floor level), but also vertically , involving supervisory and control management levels.

An example of off­line control reconfiguration is related to the roughing and cementing robotic cell. The robotic cell control has been implemented by considering a set of production cases, with each representing the sequence of operations to be performed for the specific part type. Together with the production cases related to the actual part types to be processed, there is a number of cases related to parts types which are not at the moment under production but are expected to be included in the future. As a result, when the new part type will be introduced in the product portfolio, the control will be robust in the reaction so that it will be automatically capable of recognizing the part type and associating it to one of the existing specific cases.