Smart Grids are a potential application domain for the application of IEC 61499 technologies.

Here is an extract from 'The IEC 61499 Function Block Standard: Launch and Takeoff', by Thomas Strasser et al.

The Smart Grid is characterized by the U.S. Department of Energy as follows:

...smart grid means “computerizing” the electric utility grid. It includes adding two­way digital communication technology to devices associated with the grid. Each device on the network can be given sensors to gather data (power meters, voltage sensors, fault detectors, etc.), plus two­way digital communication between the device in the field and the utility’s network operations center. A key feature of the smart grid is automation technology that lets the utility adjust and control each individual device or millions of devices from a central location.... The number of applications that can be used on the smart grid once the data communications technology is deployed is growing as fast as inventive companies can create and produce them. Benefits include enhanced cyber­security

In contrast to traditional systems, active control at the consumer (load) side plays an important role in the Smart Grids area. Demand Side Management (DSM)/Demand Response (DR) is an appropriate method in order to improve the quality of the power and energy system as well as to reduce energy consumption. It is common understanding, in both research and industrial communities, that traditional hierarchical automation design approaches are not going to work for the Smart Grid.

The control architecture of the Smart Grid is seen by many researchers as a heterogeneous network of controllers communicating in a peer­to­peer manner. Given the large number of heterogeneous hardware elements present in Smart Grids, standards for the design and implementation of their automation, communication and control systems are indispensable. Several standardisation bodies (IEEE, ISO, IEC, ITU, etc.) are working on this topic. A very important approach for communication and interoperability is the IEC 61850 standard, which is referenced extensively in the NIST Framework and Roadmap for Smart Grid Interoperability Standards.

IEC 61850 aims to harmonize the information and data used in power utility automation in order to simplify the interoperability between heterogeneous devices from different vendors. The standard consists of ten different parts covering the topics of modelling, configuration, and communication, using object­oriented data modeling. One of the core elements are the so called Logical Nodes (LN) for the modelling of devices and functions of the power system (e.g., circuit breaker, voltage controller). LN properties are usually represented in tabular format; however, the System Configuration description Language (SCL) – based on XML – has been introduced into IEC 61850 to enable the modelling of a complete configuration of a power utility system. Since the IEC 61850 standard mainly addresses the interoperability of power system utilities, additional standards are required in order to account for the implementation of their functionalities (e.g., interlocking functions, voltage control functions, ancillary services). Promising approaches to be applied are for example the IEC 61131­3 programming languages and/or the IEC 61499 reference model. 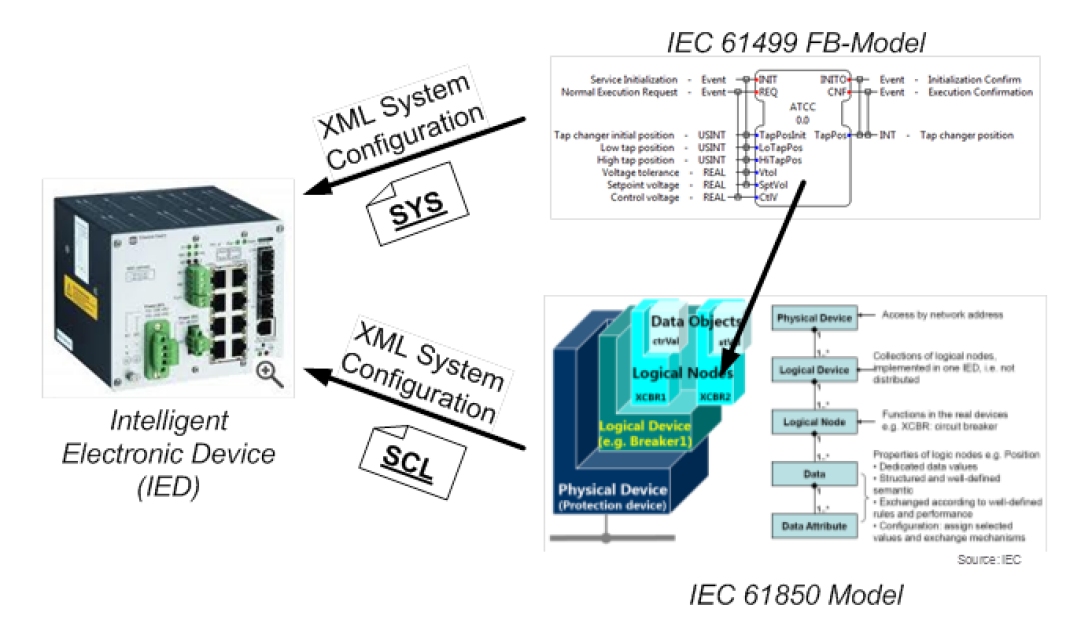 There are many advantages using the IEC 61499 approach for Smart Grid applications, including its object­ based component orientation, reusability, interoperability, and system­level view. For instance, IEC 61499 technology can be used for: