MAYA AND DAEDALUS: THE DIGITAL TWINS 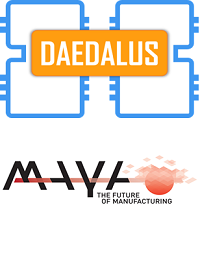 The concept and implementation of Cyber-Physical Systems (CPS) in industrial manufacturing is, by definition, a multi-disciplinary research challenge, where the digital extension of manufacturing assets, represented through the so-called digital twin, must be equally sustained by a methodological and technological change at control-level.

Thus, tackling different but complementary aspects for the deployment of effective CPS in current and future Factories, MAYA and DAEDALUS projects have formalized a concrete collaboration to the aim of maximizing their respective objectives through a synergistic approach in facing development, exploitation and dissemination.

Technically speaking, the collaboration has been built on top of two key cornerstones of both projects, a Simulation Framework for CPS and IEC-61499 standard and technologies for distributed automation, brought together thanks to the concept of Digital Synchronization and the usage of a common semantic model. The objective is to exploit the industrial-grade demonstration built by Daedalus in its Competence Centre to achieve a common and integrated showcasing of how the results of the two projects were designed and implemented taking into account an overarching functional architecture.

But the collaboration will not be accomplished only at technical level. The target groups for the exploitation of MAYA and Daedalus are strongly overlapping, laying the ground for a common effort to sustain market acceptance for the core technologies of both projects. This will be explicitly achieved through several joint actions, both in terms of communicating and disseminating the benefits provided by the project’s results and sustaining dedicated events to involve potential end-user